In practice, the geophysical methods have substantial application in solving problems in geotechnical engineering. These methods cover a range of investigations that determine the underground soil structure and engineering properties of the material. The geophysical methods are used to determine the structure, thickness and properties of the individual layers below the ground surface, which foresees the construction of certain structures.

Geophysical measurements are conducted from the surface of the ground, in wells, excavations or in combination of locations where sources and detectors are placed. The scope of investigation, types of methods and techniques generally depend on exploration objectives, available resources, geological and topographical conditions. Today, a large number of geophysical methods is used, but geoelectrical tomography and seismic refraction methods are most often applied in Montenegro.

Geoelectrical tomography belongs to technologically very modern methods intended for investigation of underground soil structures, usually to a depth of about 100 to 200 meters. These methods are applied in different variants, in accordance with the research purpose and depending on how the composition of the electrodes dispositive is used for achieving electrical contact with the ground, or to impart electrical field soil and simultaneous observation of his response. This method is based on the effect of the electrical resistivity difference of various rock types and materials to artificially generated electric field.

The process of geoelectrical tomography exploration is performed by multiple profiling of the same space, with sucesive increase of the electrode dispositive range. The electric resistivity investigations can be performed in 2D or 3D form of scanning field. The total length of scanning profiles is arbitrary, and it is determined according to the needs of the planned exploration in terms of depth and length of the profile. The degree of accuracy and resolution of this method depend on the research depth, and in principle can be expressed as 1-2% of exploration depth, depending on the specific conditions for its implementation on the ground.

The process of numerical geoelectric resistivity modeling in the computer processing of field geoelectric observations is performed on very complex mathematical model of the soil, which is a real geological cross-section of the terrain, approximated by group of several thousand prismatic two-dimensional (or three-dimensional) blocks. By numerical simultaneous inverting of the difference between the measurement and calculation results of the resistivity response of formed soil model, in the iterative procedure, convergent optimizing of true value of specific electrical soil resistance for all blocks in the model is performed. The resulting model is given in graphical form, so directly can be interpreted in geological sence, having in mind the reference values of the electrical resistance of various geological formations.

Seismic refraction is a non-invasive geophysical method, which are often used in field research of soil and rock mechanical properties. It is based on measuring the propagation time of elastic seismic waves, from the source to the seismic receivers (geophones) through the geological structures below the surface. Seismic waves diffract on boundaries of different geological layers (structures) because of differences in their elastic properties and specific density. When a seismic wave, during propagation in one geological layer (structure) with different velocity propagation, part of its energy is reflected on the geological boundary, and the other is refracted, based on basic laws of optical physics, applied in the field of propagation of elastic material deformation – seismic waves. In seismic refraction surveys, the part of the seismic energy which is transferred by refraction, from its source to the point of observation or seismic receiver, is measured.

As a source of seismic waves in the refractive seismic surveys, in relatively small distances, mostly hammer weighing about 10 kg is used for the mechanical excitation. After excitation, waves spread in all directions through the soil, causing its elastic deformation and after a certain time reach points on the surface, where geophones detect their arrival. By processing of measured seismic wave travel time from source to geophone, knowing the distance from source to geophones, velocity of elastic waves propagation through the ground can be calculated.

Based on the seismic waves velocity through the different geological structures, calculation of the very important physical parameters values of that specific structure can be conducted, such as: the strength and quality of the rock, specific density and porosity, permeability coefficient, elastic deformability parameters and so on.

By analysis of time, amplitude and frequency characteristics of P and S waves, the dynamic elastic constants could be determined and it is possible to establish a clear distinction between the different geological materials, which have the same or a similar velocity of seimic waves. 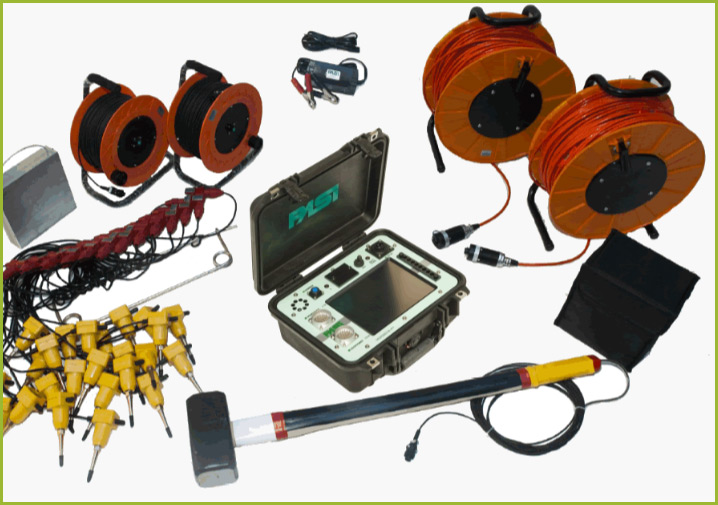 You have a question?

If you have a question regarding our services, please click the link below and visit our FAQ page.
- FAQ -